Asian Institute of Applied Buddhism (Plum Village Hong Kong) is a co-organizer for the Thich Nhat Hanh & Plum Village Monastic's Teaching Trip in Japan 2015, to be held from April 27 to May 13, 2015. There are requests from practitioners outside of Japan to attend the events. An international lay delegation whole-trip tour, from April 28 to May 13, is held for those who could attend the whole trip. You can find information about the whole-trip tour here. For those who could only attend a shorter period, a lay delegation Retreat Tour from May 1 to May 8 is held. Still, there are requests from people who can not attend the whole tour but can attend more than the retreat only tour.  A Shorter Tour May 1-13, 2015 is created to accommodate such requests.  The information below is for the  Shorter Tour May 1-13, 2015. 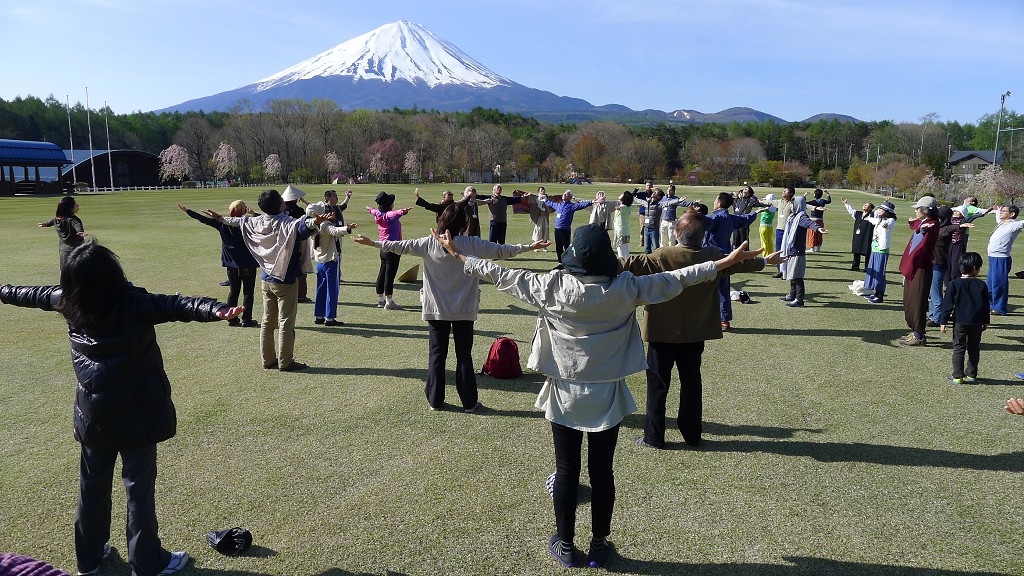 Practicing 10 Mindful Movements at Mt. Fuji Retreat in May, 2014.

For those who would like to register for the Retreat Tour, please register online at pvretreats.org/aiab. Cost for the Shorter Tour is Japanese Yen 254,100.00.   Payment is paid to the Plum Village Foundation Hong Kong (in Japanese Yen). Instructions for making payment are provided in the confirmation e-mail after your online registration.

Plum Village Hong Kong does not charge any fees for handling this tour. This tour is organized by Japanese Tourist Bureau, the largest Japanese Travel Agency. Please note that this cost does not include the transortation cost to and from airport on the arrival and departure date, because it depends on the arriving airport. Those costs will be paid by cash later once in Japan.

2. How do I get to the hotel upon arrival? We will arrange the transportation for you. After buying your flight tickets, please inform us about your arrival/departure information via the online registration site, pvretreats.org/aiab. Instructions will be sent to you. You will pay for the these expenses by cash. They are not included in the package cost.

Haneda was the primary international airport serving Tokyo until 1978; from 1978 to 2010, Haneda handled almost all domestic flights to and from Tokyo as well as "scheduled charter" flights to a small number of major cities in East Asia, while Narita International Airport handled the vast majority of international flights. In 2010, a dedicated international terminal was opened at Haneda in conjunction with the completion of a fourth runway, allowing long-haul flights during nighttime hours.[3] Haneda opened up to long-haul service during the daytime in March 2014, with carriers offering nonstop service to 25 cities in 17 countries.[4]

Haneda handled 68,906,636 passengers in 2013; by passenger throughput, it was the second busiest airport in Asia and the fourth busiest in the world, after Hartsfield-Jackson Atlanta International Airport, Beijing Capital Airport (Asia's busiest) and London Heathrow Airport.[5] It is able to handle 90 million passengers per year following its expansion in 2010. With Haneda and Narita combined Tokyo has the third busiest city airport system in the world, after London and New York City.

Narita handles the majority of international passenger traffic to and from Tokyo and Japan, and is also a major connecting point for air traffic between Asia and the Americas. The airport handled 35,379,408 passengers in 2013.[2] It is the second-busiest passenger airport in Japan,[4] busiest air freight hub in Japan,[5] and tenth-busiest air freight hub in the world.[5] It serves as the main international hub of Japan's flag carrier Japan Airlines, All Nippon Airways, Nippon Cargo Airlines, and low-cost carriers Jetstar Japan and Vanilla Air. It also serves as an Asian hub for Delta Air Lines and United Airlines. Under Japanese law, it is classified as a first class airport.